Szal Design was asked by Babiators to design and build a product display to display their product on the 2012 Mother's Day special of The Ellen Degeneres Show. There were no requirements or restrictions on the design, other than it had to be approved by The Ellen DeGeneres Show. This post will show the process, from concept to completion.


It all starts with a concept. The slogan for Babiators is "Safe. Durable. Awesome.", but above all, the display had to be awesome. Nothing generic or seen before. Something suitable and utterly cool for this cool brand. Being aviator style sunglasses conceived by a Marine F/A-18 fighter pilot, clouds and the feeling of flying are integral parts of the company's branding. The theme of the display naturally became floating and flying amongst the clouds.


However, to take the display to the next level, this would be a 3-dimensional display, with the ability to swivel 360 degrees. But how to design this display? Enter Rhinoceros, a powerful 3-D modeling program. Rhino can model any shape you can design, and can export models to a wide variety of different file formats, such as AutoCAD or 3DS-Max, as well as formats used by digital fabrication and rapid prototyping machines, such as Stereolithography. Below is a photo of the Rhino design taken of my iPad's iRhino 3D app, which, by the way, is a great way to show your Rhino models to clients! 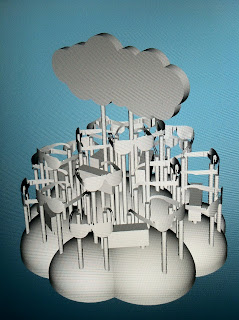 The cloud base is made of different sizes of intersecting spheres. The sunglasses and boxes are suspended above the base on slender pedestals; 4 per pair of sunglasses, and 2 for each box. A cloud shaped banner with appropriate Babiators branding completes the display by hovering over the display. To aid viewing of the different colors of sunglasses and boxes, the entire display would be white, except the banner, which would incorporate the Babiators blue and white cloud background (used on their product boxes), logo, and slogan. The whole display would then sit on a large lazy susan bearing to swivel around. The display's overall size is 24"x24"x24".
Overall, a fairly simple and elegant concept, but one that is easy to fully mess up without proper, careful planning. the 4 posts holding each pair of sunglasses must be at exactly the correct height and position in order for the product to stay on the display, and the same is true for the boxes. Add to that the fact the each pair of sunglasses and boxes is at a different height and in a different position and rotation from it's neighbors, and that they're all sitting on the uneven surface of the cloud base, and you're looking at 96 individual posts of differing heights that have to end up being at exactly the right height and in exactly the right position, and the "simple" concept seemingly becomes outrageously complex. So how to fabricate it?
Let's break it down into parts. First there is the cloud base and cloud banner. Enter Landform Models of Somerville, MA (a component of GPI Models, Soverville, MA for those of you in the Northeast/New England area). The cloud base model was sent to Alex O'Hagan at Landform Models, who CNC routed the base out of a high-density foam laminated to a 1/2" MDF base for structural support. He also CNC drilled the holes for the posts in the correct location and depth, based again upon the initial model. We chose to drill the holes 2 inches into the foam, or down to the MDF base, whichever came first. Many thanks to Alex, who did an awesome job, and worked well into the night on a Friday to get this done one time! See below for photos of the raw base and banner. 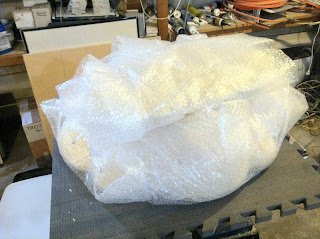 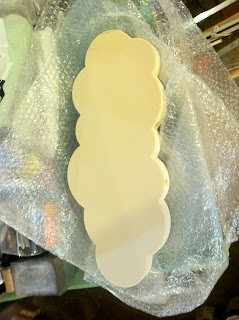 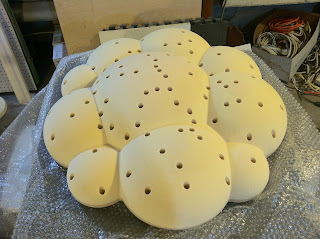 Next, the posts. I chose to use birch dowels, which aren't the straightest or uniform material to use for precision fabrication, but are by far the easiest to finish, and considering that I had one week to fabricate the display, they were the only feasible option. But how to make sure that each is the correct height, or that it gets placed in the correct slot in the base? Enter the initial Rhino model. Since we know the depth the posts are set in the base, we can just take a simple dimension to get the correct cutting length. As for the position, I made a quick plan of the display, with each post location grouped with each pair of sunglasses or box, and given a unique identifier, as seen in the photo below. 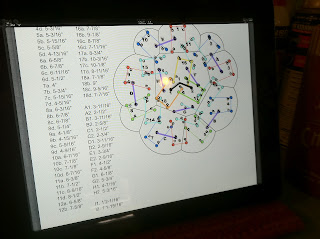 Once the dowels were cut, it was time to paint them while I waited for the foam base and banner to be completed. I used 5 coats of sandable spray primer to give a uniform, smooth, white surface, sanding carefully between coats. I then used 5 coats of white spray paint to finish. The paint added a bit of texture to the finish, which gave a somewhat fuzzy, cloud-like quality to the finish. Below is my sanding station and outdoor "spray booth". 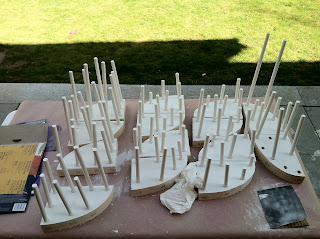 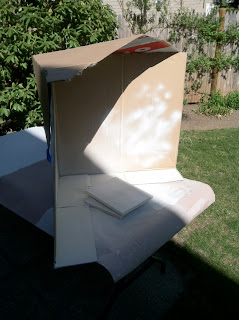 As for the cloud base and banner, the first step was to sand out the signs of the CNC router. The cloud base was slightly faceted, and the banner edge was a bit jagged, but a few pieces of slow, 220 grit sandpaper later, and the foam was much smoother. To fill the tiny holes in the foam surface foam I applied 2 coats of modeling paste, which was then sanded, revealing a perfectly smooth surface. To prevent paste from entering and hardening inside the post slots I cut short scrap dowels to fit into the holes from the leftovers from cutting the actual posts. See below for this setup, and the drying of the past between coats. 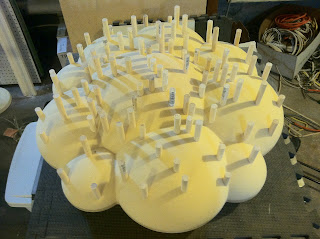 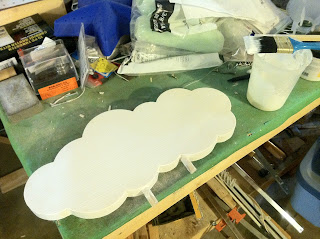 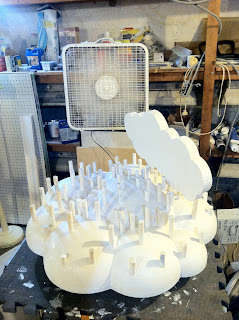 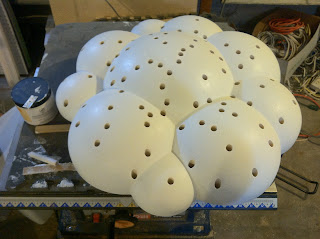 Once smooth, I applied 5 coats of sandable primer, sanding between coats, and 5 coats of white spray paint.
Assembly. With the component parts finished, the tricky part would be putting them together. With the tolerances tight, especially with the paint adding thickness to the posts, there would be only one chance to get it right, since I wouldn't be able to easily pull out any of the posts once in the foam.
Working from my display plan, I worked on one box/pair of sunglasses at a time, and carefully applied a dap of liquid nails to the bottom of a post, and tapped it into it's slot with a rubber mallet, taking care to make sure that first the earpiece posts were the same level, then the two frame posts, and finally the frames and earpieces. Over the course of a day, the display took shape, as seen below. 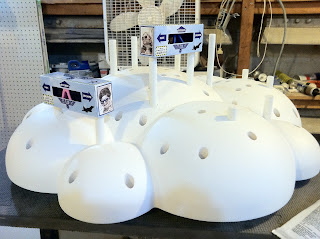 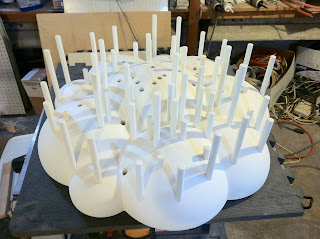 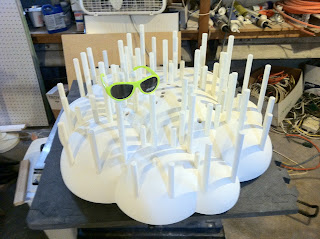 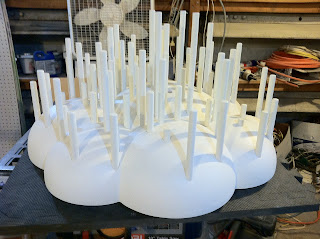 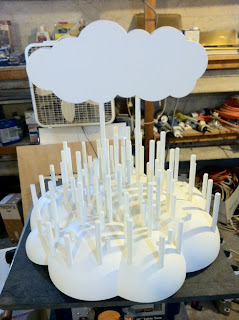 Once assembled, I found several cracks in the surface of the foam, due to the tight fit of the posts and a hard exterior of the foam, due to the two coats of modeling paste. To fix this, I simply filled the cracks with additional modeling paste, making sure to keep the surface smooth, and then sprayed 3 additional light coats of paint onto the display.
Next, finishing the display banner. The banner was designed to be removable, as it is in the most precarious position on the display. After making sure there was a snug, but not too snug fit, I dropped the banner off at the Newton, MA branch of Signs By Tomorrow for them to install custom vinyl decals to both sides of the banner. After making sure the decals weren't going to delaminate from the paint before the taping of the show (2 weeks in the future at this point), it was time to photograph the display. 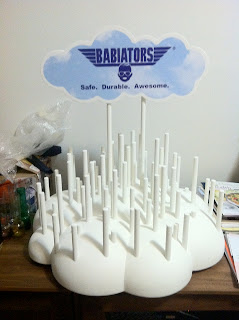 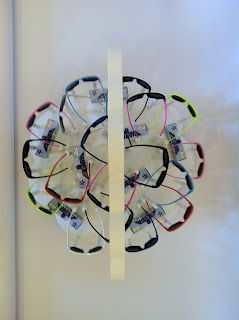 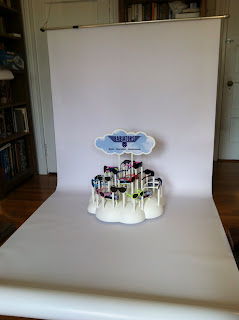 After capturing every angle of the swiveling display, adhesive discs were added to the tops of the posts, in order to keep the sunglasses and boxes from moving while the display was being moved around for the show. To set the display up, the paper back is simply removed to reveal the adhesive top side, to which the product is attached.
After this, it was time to engineer the packing of the display for it's journey across the country to Los Angeles without anything breaking. The first task was to find a box big enough to fit the display. After a few hours of searching online, calls to local supplier, and driving to different locations, I was able to procure a 26"x26"x26" box. A quick trip to Home Depot for some rigid foam insulation, and I was able to get started.
I first cut the bottom, and then the 4 sides of the box, with all 5 sides interlocking to keep them at the boundaries of the box. I then cut an angled chunk of foam from the middle of the sides, to accommodate the width of the display base. The sides would then be able to keep the display in position by keeping it pressed against the bottom of the box. I then made a custom bag with handles to fit the display into, and padded the areas where it would come into contact with the rigid foam. The bag then went into the box, then the sides. Packing peanuts were then added to give additional stability. I ran out of peanuts at this point and had to break up chunks of foam to use as well! Then a foam cover was added. The remaining space in the box would be taken up my the sunglasses samples and other materials to be sent to the show. Rigid foam filled in any other spaces and added additional support for the box and display. See photos below. 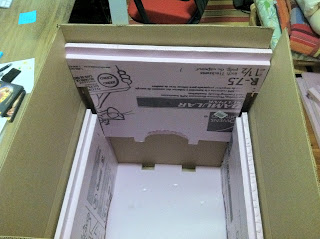 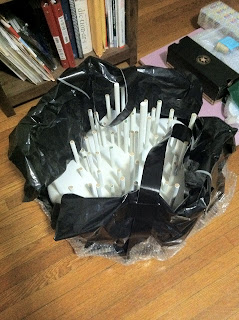 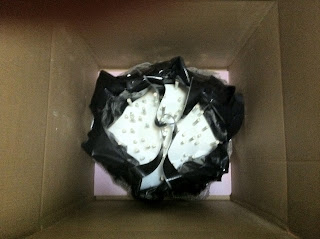 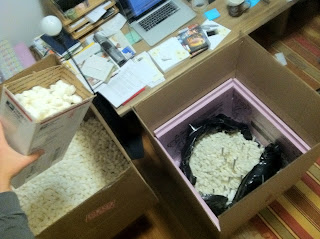 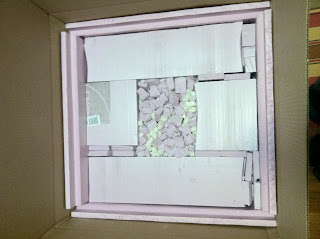 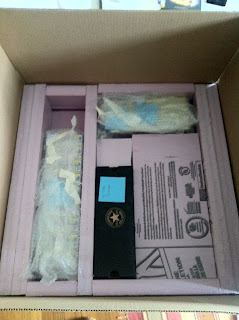 The display was then shipped, arrived, set up, and featured on the Ellen Show without a hitch! Congratulations Babiators on being a featured product on the show! It was great to be a part of it!
Posted by szaldesign at 8:38 PM

szaldesign
Szal Design was founded by Tim Szal in the hope of using glass to create an installation of light. Tim obtained his B.S. in Economics from Trinity College in 2006 and his Masters in Architecture from the University of Michigan’s Taubman College of Architecture and Urban Planning in 2009. Tim is also a LEED Accredited Professional, committed to environmentally conscious design. When not working on a new glass project, Tim can usually be found watching episodes of BBC’s Top Gear or covered in sawdust pursuing his other interests in woodworking.